Direct Hydrocarbon Mapping in the Onshore Basins of Mexico

This historic exploration arena contains a prolific series of mature Petroleum Provinces in several basins. These have produced multi-billion boes of reserves from super-giant to very modest sized fields for over a century.  Now, DHM surveying is pointing towards a new chapter in its petroleum history with further major reserves yet to come.

Scotforth DHM surveyed in Mexico for the first time in 2017. This six month R&D programme has reached fruition with recognition of most of the main fields in the examined basins of Tampico and Veracruz. It has also identified an exciting, emergent inventory of new untested prospects and field extension possibilities. Equally, but in the opposite direction most industry dry holes and failed prospect test locations lack any significant spectral Hydrocarbon Lead Indicator anomalies (“HLIs”).

DHM therefore appears to have high Survey Effectiveness in these two basins.  Accordingly and taking into account the proven field calibrations and the analogous nature of the untested HLI anomalies on the same processed images it is considered likely that new prospects will have a 60-75% chance of becoming significant new discoveries, if tested in suitable HLI locations.

A good number of these new HLI prospects and leads have substantial gross areal extents offering scope for major new discoveries. Additionally, this DHM R&D coverage suggests the presence of various field extension and satellite accumulation possibilities that should add to both EURs and deliverability profiles of known pools.  This is quite remarkable given the very long history of drilling and production in these basins.

To illustrate Scotforth’s current R&D findings, a number of examples of its RSDD-H processed HLI images are provided below with synoptic commentaries. [It should be noted as always that these are simply single image examples and not definitive of any full DHM survey map that is built from assessment of multiple images, often processed using multiple algorithms].

Beyond this, Scotforth is extending its R&D investigations into the Burgos and Southeast basins, aiming to reach a similar position of DHM confidence in these areas in the coming months.

Hot orange areas are “HLI” anomalous and green to yellow areas are non-anomalous low prospectivity. Most productive wells are on anomaly and the fewer wells drilled off-anomaly are largely dry holes. Further potential exists in this district according to the HLI pattern. Comprehensive, higher resolution, DHM surveying would refine this and generate a ranked inventory of new drilling / prospect opportunities. 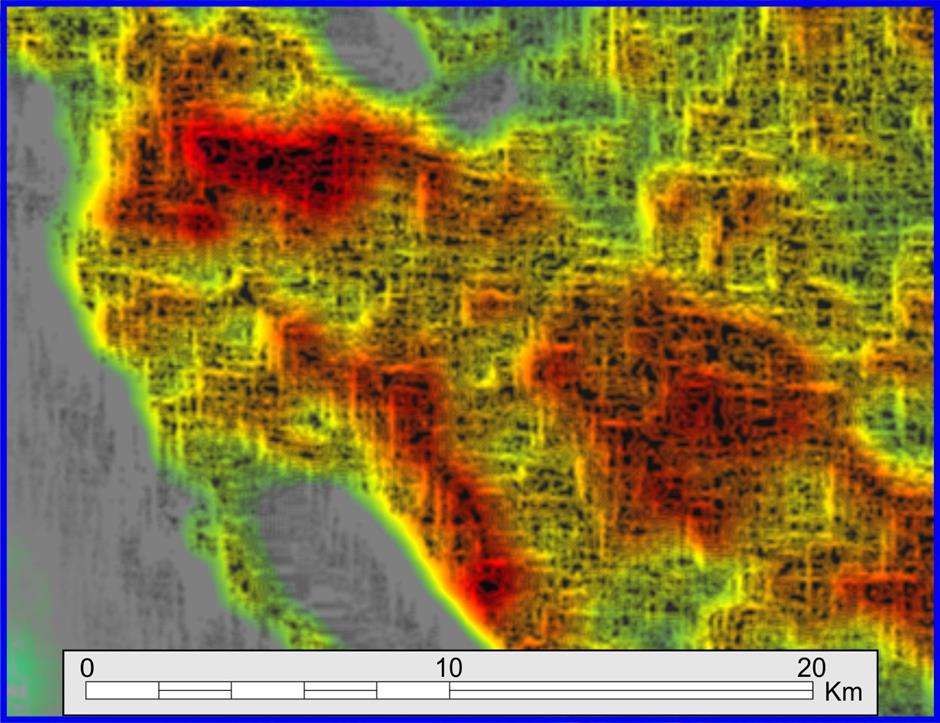 Three large HLI leads (hot orange to black) are present and a fourth is partially captured in this illustration.  These are large enough to host 100+MMBOE accumulations. The surrounding terrains (grey/ green to yellow) are spectrally non-anomalous and likely to be poorly prospective. 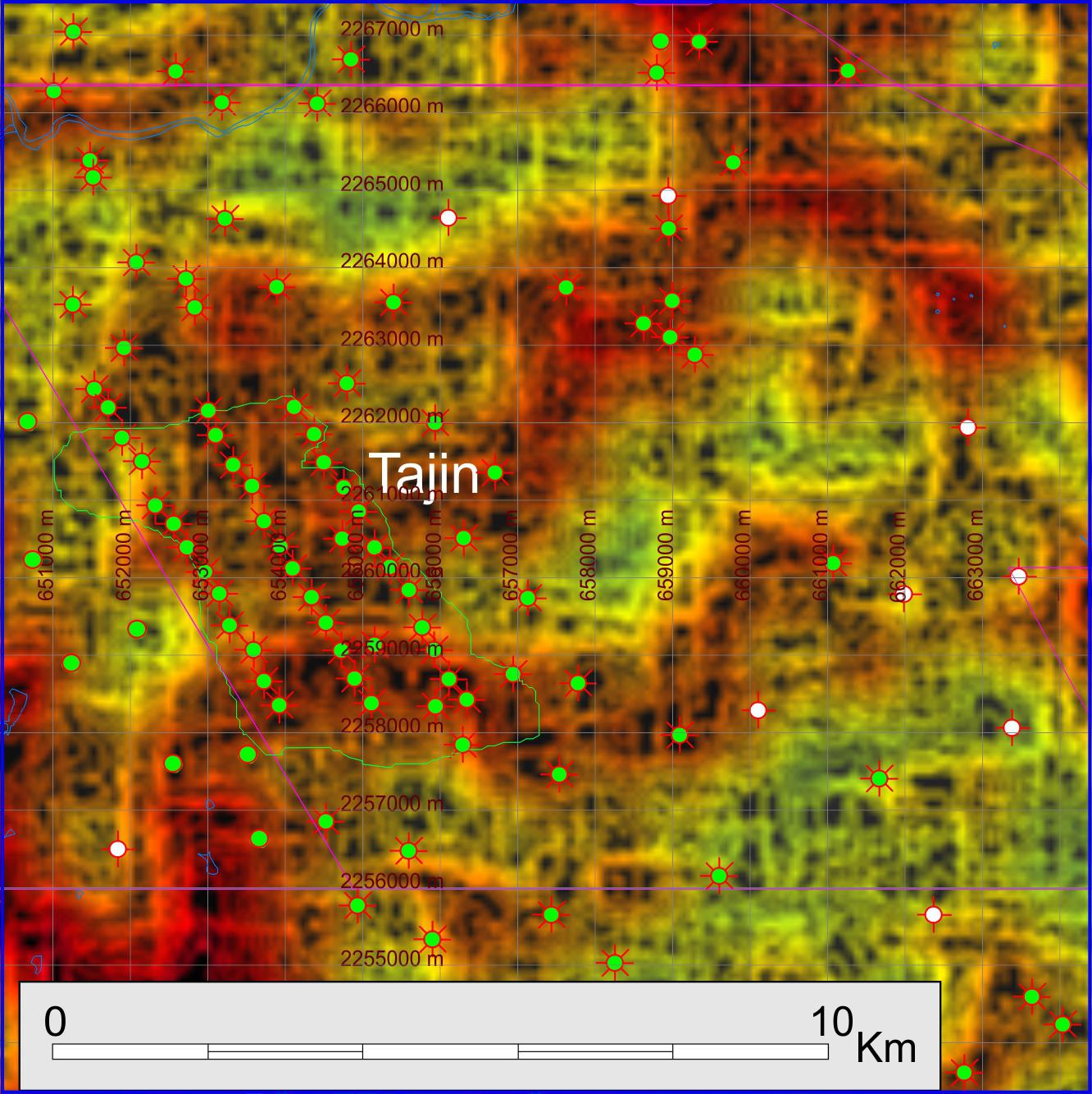 The hot orange/black areas are HLI anomalous; the green/ yellow areas are poorly anomalous to non-anomalous.   Based on these (single image) HLI / DHM observations and the posted status of drilled wells it is suggested that further low risk locations await drilling with, most notably, some step-out field extension / satellite accumulation prospects in the NE and SW and a smaller one in the north central sub-area. The fewer wells drilled in the generally non-anomalous, less appealing sub-areas comprise a mix of D&As and some producers. Higher resolution processing and well reserves analysis is required to better assess residual potential there. 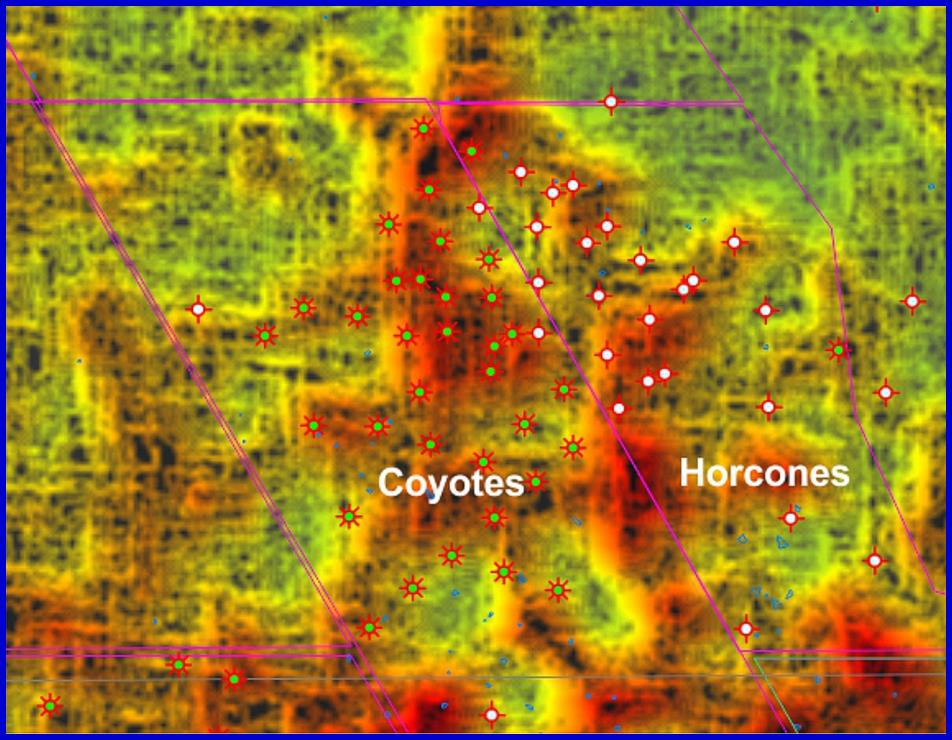 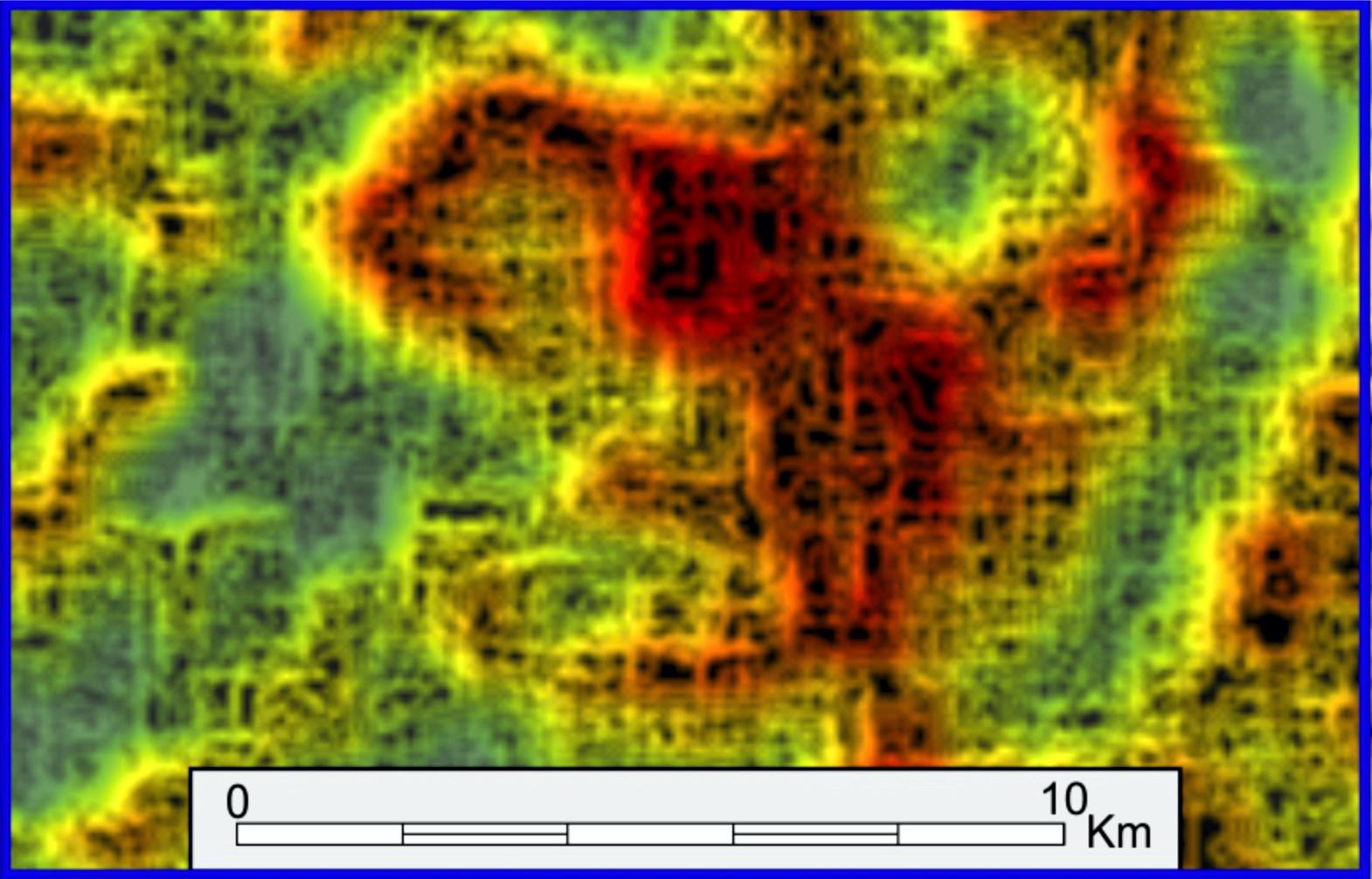 Hot orange/ black HLI core area appears prospective on this DHM/HLI evidence. It will map out with greater detail under higher resolution processing and multi-image mapping. Nearby drilled well calibrations suggest this is a high Probability of Discovery (PD) feature. Measuring approximately 20km2 it could contain significant commercial reserves.

It now seems from this DHM R&D that the ultimate conventional hydrocarbon potential of Mexico’s onshore basins is considerably greater than currently / conventionally perceived, at least in Tampico and Veracruz.

As with DHM investigated basins in other countries, a concerted exploration campaign deploying the best of HLI and CLI (conventional exploration) surveys there can optimally achieve this success on an accelerated, lower cost basis.  Scotforth suggests that:

Scotforth is now ready to engage with new clients, partners and allies in Mexico in these two basins, to create this enhanced success.  It can be done by:

In the future this opportunity will extend to other onshore Mexican basins if and as successfully researched by Scotforth.

Should any of this Mexican DHM campaign align with your venture activities or exploration intentions there please do contact us:  This email address is being protected from spambots. You need JavaScript enabled to view it.