Scotforth's continuing exploration of EARS suggests that Turkwel in Kenya will be one of the next petroliferous basins. Our basin-wide Direct Hydrocarbon Mapping (DHM) reconnaissance utilising RSDD-H has identified Hydrocarbon Lead Indicators ("HLIs") there, analogous to those in the nearby Lokichar Basin. The first image below illustrates Turkwel's geographic setting whilst  the second is an example of anomalous RSDD-H response character within it. The illustrated  RSDD-H anomaly locates in the Tullow Oil / Africa Oil Block 13T, measures approximately 75km2 and as a new  exploration focus area ("EFA") appears  ready for exploration progression into discrete leads and prospects with related risk reduction and Petroleum Resource Potential assessment. 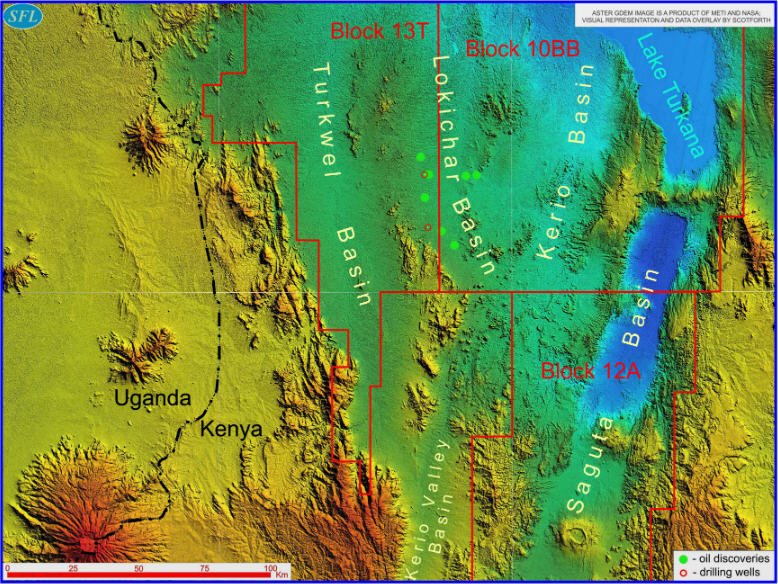 This ASTER GDEM (topographic) image illustrates semi-regionally the clear geomorphological and elevation patterns of this part of EARS and its rift basins as well as its nearby volcanoes. The lowest elevation terrains are in blue, the highest in orange. The "deep blue" north Saguta Basin sub-district represents the lowest actual ground elevations in the district though it has no lake, unlike the "blue" (actual) Lake Turkana to the north. The rift basins are more typically the combined blue and green intervals of this GDEM "colour elevation gradient" visualisation.

The emerging hydrocarbon habitat of the Lokichar basin is clearly signalled in the ASTER GDEM by the spotting of Tullow's discovery oil wells (green). Two new wells are currently drilling (red outlines). It is Scotforth's expectation (from its mapped PI there) that Tullow's excellent success record thus far will be upheld in 2014. The undrilled Turkwel Basin is the next parallel rift basin to the west, some 25 kilometres distant, across a shallow intervening basement terrain. 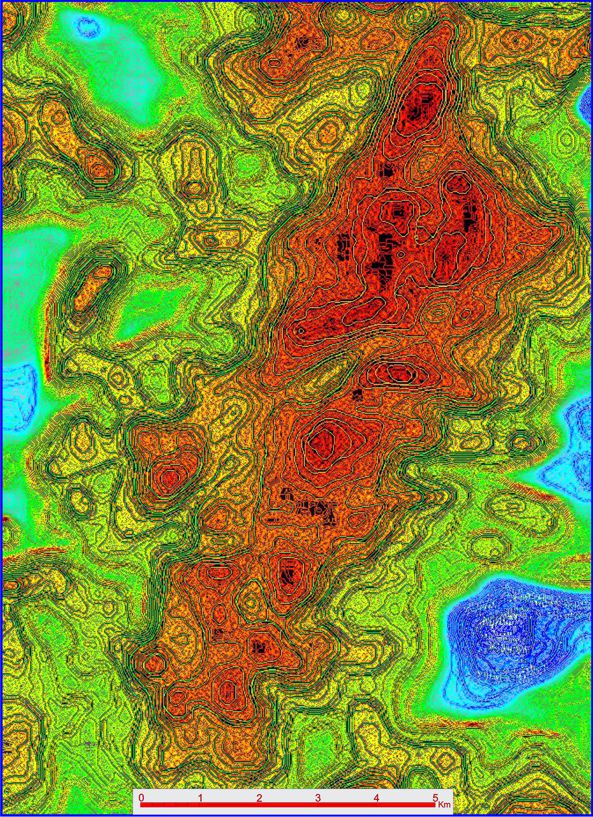 This RSDD-H Iso-photo density display ("IPD") is just one of numerous new Exploration Focus Areas identified by Scotforth within EARS basins. Most of these EFAs are as yet untested, many are probably not yet on the exploration prospect books of licence holders and operating JV partnerships and several such prospective terrains are still unlicensed.

This particular Turkwel anomaly (red/black through hot orange) is large, surrounded by poorly prospective non-anomalous terrains (yellow through green and blue) and is generally analogous to patterns observed under similar RSDD-H imagery processing  in neighbouring Lokichar.

For more information please contact us via This email address is being protected from spambots. You need JavaScript enabled to view it.