URUGUAY: Oil and Gas in the Norte Basin? 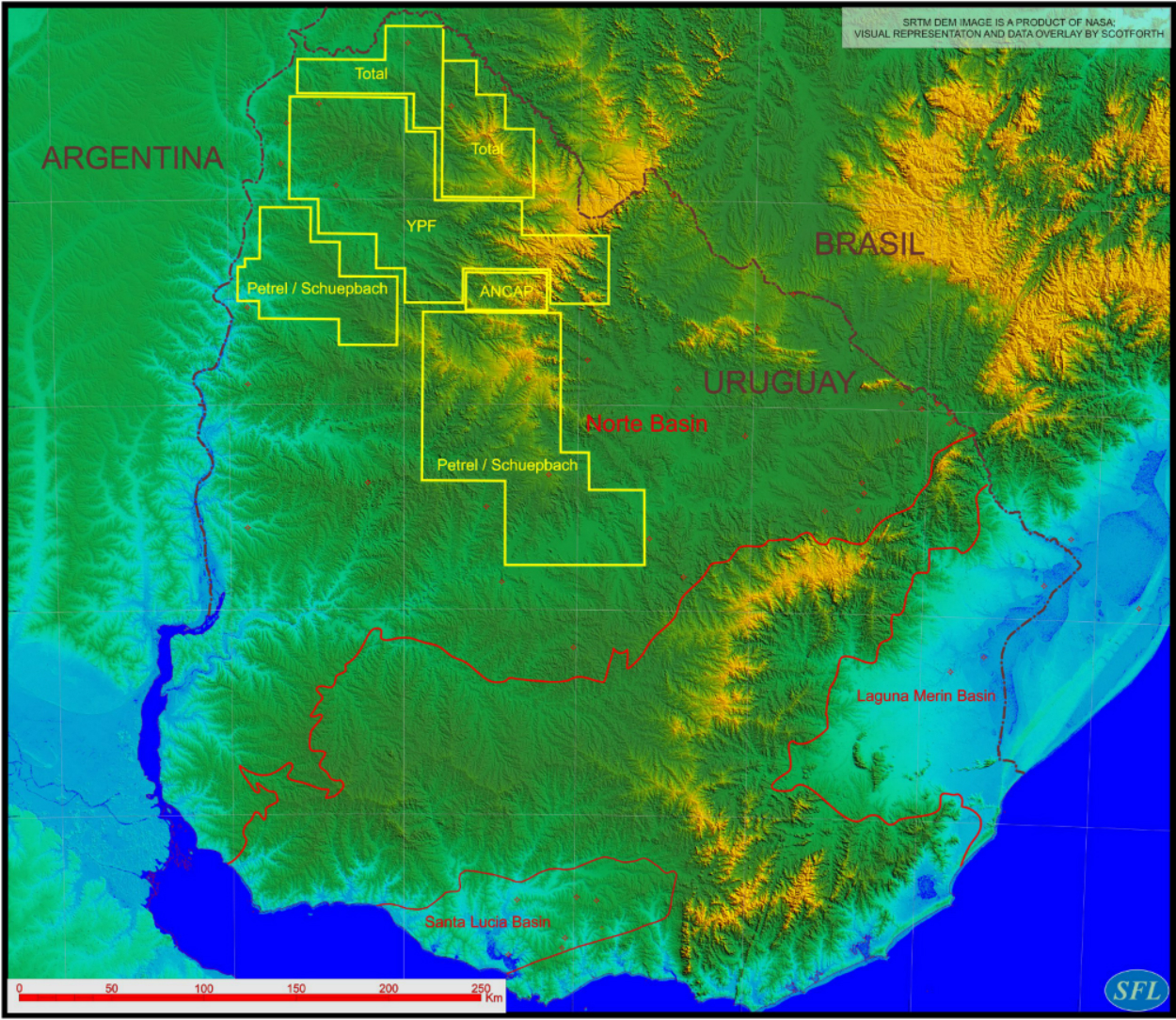 Many of the intra-cratonic onshore basins of South America are heavily under-explored, especially where geographically remote or seismically opaque due to widespread and thick volcanics. Therein lies their exploration opportunity. The Norte Basin of Uruguay is one such case.

Basins:  Uruguay has essentially three onshore basins – the large Norte Basin to the NW of the Uruguayan Shield (part of the even greater Parana Basin of Brazil and adjacent Argentina) and in the SE, the Santa Lucia and Laguna Merin “failed rift” Basins, incised into the Shield.

Scotforth has examined Norte.   Its geology was summarised by ANCAP in the Uruguay 2ndLicensing Round. Its four chronostratigraphic “megasequences” range in age from Early Devonian through Late Cretaceous. There is up to 2,500 metres of preserved section and it is now recognised that a series of NW-SE oriented Devonian grabens transect its more than 90,000km2 expanse.

Norte has had less than twenty wells drilled into it – effectively it remains a frontier exploration arena.

Petroleum Systems: There is a probable working petroleum system in the basin charged by the moderately rich Devonian Cordobes Formation. This formation measures up to 160metres in thickness with as much as 60 metres of organic-rich shale. It is predominantly a Type I/II marine kerogen capable of significant oil generation – a moderately rich source facies. It has attained a vitrinite reflection value of 0.6% (oil generation onset) at outcrop, adjacent to the unroofed Uruguayan Shield in the SE and is predicted to increase in maturity northwestwards with a modelled oil/wet gas to dry gas window transition occurring at depths of approximately 3200metres.  Maximum burial within the Devonian grabens should certainly have taken it through peak oil generation.

The other main possible source facies (apart from immature Permian coals) is the extremely rich early Permian oil shales of the Mangrullo Formation. These appear however, to be immature across the basin.

Drilled wells such as ANCAP’s Canada Charrua on the “platform” and Petrel Energy’s recent Cardoza Chico “in graben” corehole mention live oil shows. The presence of suitable reservoir and seal conditions appears probable, at least within the Devonian graben areas and suitable trapping geometries can be inferred as present.

The effectiveness of migration - lateral and vertical- into conventional trap environments is little tested so far but should, given the tectonic history of the basin, be considered likely at least within the Devonian grabens. The possibility of area-wide “intra-source” unconventional petroleum resources is moderate to good.

For present therefore, on conventional geological considerations, the existence of working “Petroleum Systems” within the Norte Basin appears probable. Its petroleum resources outlook could contain both conventional and unconventional plays.

Direct Hydrocarbon Mapping (DHM) in the Norte Basin: Scotforth has screened most of the Norte Basin over the past one to two years and has observed encouraging anomalous patterns in several districts. Some of these appear discrete, moderately intense and localised – typical of conventional play leads and prospects. 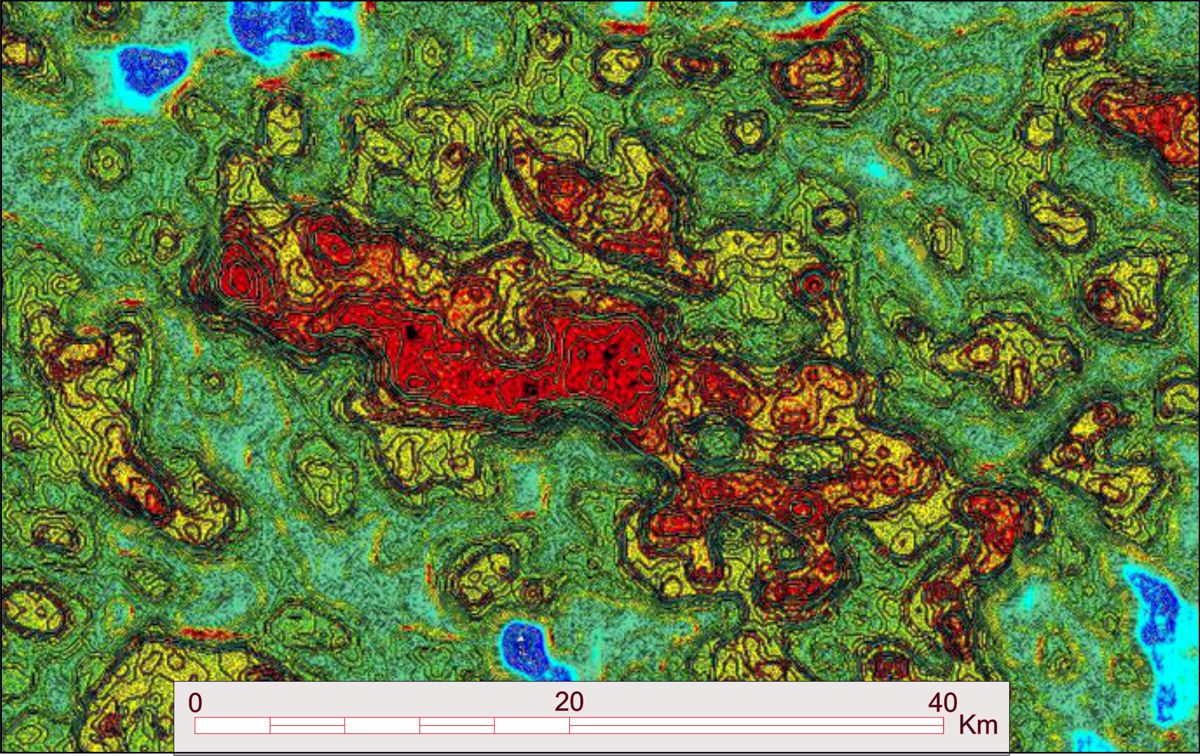 Others are more pervasive and of a generally poorly bounded, diffuse nature. They may be indicative of unconventional shale gas and shale oil accumulations.

Petroleum Resource Potential (“PRP”):  The USGS assessed the undiscovered conventional petroleum resource expectations of South American Basins in 2012, including the Parana/Norte Basin. It estimated total mean petroleum resources for Parana of 429 million barrels of oil (MMBO), 10.1 trillion cubic feet of gas (TCF) and 275 million barrels of natural gas liquids (MMBNGL).  Perhaps only 15- 25% of this would locate in the Norte Basin segment.

It more specifically assessed the Potential Shale Gas and Shale Oil Resources of just the Norte Basin in 2011. This assessment suggested a total mean unconventional, technically recoverable, petroleum resource of 13.36 TCF of gas, 508 MMBO and 499 MMBNGL.

DHM indications are directionally supportive of such possible numbers and until further surveyed (and explored by drilling), of carrying a wide P95 to P5 fractile PRP range –as currently modelled by the USGS.

Scotforth is well positioned to provide clients with prospectivity progression insights into this basin, the selection of new licence block targets and identification /development of prospect inventory and “sweet spot” focus areas within existing licences:  This email address is being protected from spambots. You need JavaScript enabled to view it.